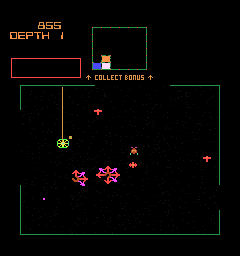 Space Dungeon is a shoot 'em up arcade game released by Taito Corporation in 1981 and designed and programmed by Rex Battenberg. It was available both as a conversion kit and as a full arcade cabinet. Like Robotron: 2084 (1982), but preceding the release of that game, the controls for Space Dungeon are a pair of 8-directional joysticks: one for moving, one for shooting. Space Dungeon may have been the first twin-stick shooter. Overview Each level of Space Dungeon consists of 36 rooms arranged in a six-by-six grid. Rooms are connected by open doorways of various sizes. One room in each level is the entrance, where the player begins, and another is the "Collect Bonus" room. Other rooms may or may not contain laser defenses, hostile aliens, or various bits of treasure. The goal in each level is to navigate using an automap to the room containing the "Collect Bonus" area, visiting as many rooms and collecting as much treasure as possible along the way. The player's only weapon is a laser cannon, which fires a pulsing, solid beam in any of eight directions. Higher scores are awarded for exiting each level with more treasures. A 10,000-point bonus is awarded if the player visits every single room on the level, whether or not all treasures on the level have been collected. Since an extra ship is awarded to the player every 10,000 points, this, and the large point values of the treasures (especially the later ones) created an interesting tension between securing the treasures already collected or risking losing ships to acquire more. If the player's ship collides with an enemy or any of their spore shots before reaching the "Collect Bonus" cube, all collected treasure is dropped in the room where the ship was destroyed. This room is designated on the map by an "X".

Space Dungeon is an arcade style shooter. You control a spaceship within the space dungeon which consists of numerous rooms. Located throughout are treasures, and your goal is to collect as many of these treasures as you can and then proceed to the dungeons exit (called "collect bonus"). You don't need to collect every treasure to complete a level, but more bonus points are earned the more treasures you collect. Many of the rooms contain dangerous enemies, including death squares, guards, enforcers, pikers, and more. To fight off the enemies, your spaceship is equipped with a laser which can fire in eight different directions. To help find your way around, a map at the top of the screen will indicate where you are, where you've been, and what rooms visited so far still have enemies in them. Also located in the dungeons is a thief; the thief has the same goal as you, and will try to steal the treasures before you can. The thief can't be destroyed, but shooting it will cause it to drop any treasures it may be carrying. If you lose a spaceship at any point by crashing into an enemy or enemy fire, you will be sent back to the starting location and all the treasure you were carrying will be left in the room where you died. The game ends when you have lost all of your reserve spaceships.

You can use F1 to proceed through all the configuration screens, stopping when you see the title screen. Setup is complete.